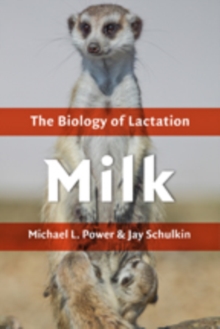 Milk : The Biology of Lactation Hardback

After drawing its first breath, every newborn mammal turns his or her complete attention to obtaining milk.

This primal act was once thought to stem from a basic fact: milk provides the initial source of calories and nutrients for all mammalian young.

But it turns out that milk is a much more complicated biochemical cocktail and provides benefits beyond nutrition.

In this fascinating book, biologists Michael L. Power and Jay Schulkin reveal this liquid's evolutionary history and show how its ingredients have changed over many millions of years to become a potent elixir.

Power and Schulkin walk readers through the early origins of the mammary gland and describe the incredible diversification of milk among the various mammalian lineages.

After revealing the roots of lactation, the authors describe the substances that naturally occur in milk and discuss their biological functions.

They reveal that mothers pass along numerous biochemical signals to their babies through milk.

The authors explain how milk boosts an infant's immune system, affects an infant's metabolism and physiology, and helps inoculate and feed the baby's gut microbiome. Throughout the book, the authors weave in stories from studies of other species, explaining how comparative research sheds light on human lactation.

The authors then turn their attention to the fascinating topic of cross-species milk consumption-something only practiced by certain humans who evolved an ability to retain lactase synthesis into adulthood.

The first book to discuss milk from a comparative and evolutionary perspective, Power and Schulkin's masterpiece reveals the rich biological story of the common thread that connects all mammals.