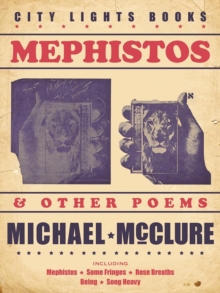 Mephistos and Other Poems Paperback / softback

A landmark work of bio-romanticism, Mephistos and Other Poems is the first completely new collection in five years from legendary Beat and SF Renaissance poet Michael McClure, reflecting his interests in mammal consciousness and ecological survival.

The title sequence stems from McClure's ongoing "grafting" experiment, growing new poems from fragments of previously ones. "Some Fringes" is a series of haiku-like nature poems, while the seventeen-part "Rose Breaths" derives from the poet's practice of meditation.

The freestanding poems grouped under the title "Being" pay homage to many of McClure's collaborators and fellow travelers like Bruce Conner, Terry Riley, and Dave Haselwood.

The book climaxes with "Song Heavy," recounting McClure's recent encounter with a beached whale in Rockport, Massachusetts, and recalling his classic "For the Death of 100 Whales," which he read at the Six Gallery in 1955--the inaugural moment of American eco-poetics. Michael McClure is an award-winning American poet, playwright, songwriter, and novelist. After moving from Kansas to San Francisco as a young man, he was one of the five poets who participated in the Six Gallery reading that featured the public debut of Allen Ginsberg's landmark poem "Howl." A key figure of the Beat Generation, McClure is immortalized as Pat McLear in Jack Kerouac's novels The Dharma Bums and Big Sur.

He also participated in the sixties counterculture alongside musicians like Janis Joplin and Jim Morrison.

McClure remains active as a poet, essayist, and playwright and lives with his second wife, Amy, in the San Francisco Bay Area. Michael and I have been twisting the Dharma for twenty years now.

He reads his poetry like a mad lion or a hummingbird or a soft evening tidal pool or a wild California thunderstorm...His words are of a new realm of love and joy and terror.

What a pleasure to play with such a perceptive artist.

It's always been my great joy to make music to his words."--Ray Manzarek [C]ertainly a genius in thought and writing it out ...McClure is one of the few contemporaries to have understood Kerouac as a literary poet--and learned some joyous classic invention therefrom ...Thus we have a McClure poet, a McClure natural philosopher, and a McClure prosateur and novelist. Hardly anyone in America with equal range and sharpness, liveness.

What more?"--Allen Ginsberg Praise for Mephistos: In Mephistos we are again thrown into Michael McClure's lavish lair of forceful magic.

Its actions are literal ones, handfuls of jewels disintegrate as a firewall rises to a solid prism.

There is no poet more adept at calling forth the elements, only to fashion them later as eternal amulets for his readers. 'NEW MOON ((BLACK!)) /STAR CLOUDS/ HALOES/ Flashlight reflects/ into two small eyes.' You will find your body changed through the labyrinth these poems initiate."--Cedar Sigo "Close attention will be rewarded in kind.

Keep Mephisto near at hand, read only a poem or two at a time, let the imagery possess you.

It's okay, you can trust it. It's McClure: he'll never steer you wrong."--Robert Hunter, lyricist, poet, songwriter "He is such a sweet paradox! Like most of Shelley and the late poems of D.H. Lawrence, McClure turns the phenomenal world inside out, seeking Mind within mind."--Diane di Prima, poet "If you've enjoyed McClure's writings in the past, this volume ought to recapture your poetic heart and rekindle your imagination."--Jonah Raskin, New York Journal of Books "Mephistos is perhaps an open love letter to all of McClure's many fans who have followed him ever since he arrived in San Francisco from Kansas City more than half a century ago."--San Francisco Chronicle 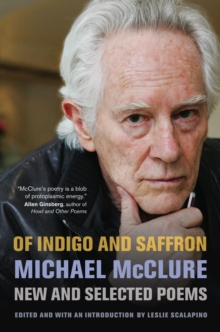 Of Indigo and Saffron