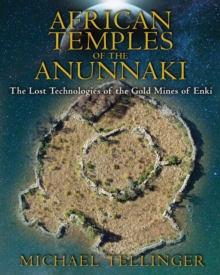 African Temples of the Anunnaki : The Lost Technologies of the Gold Mines of Enki Paperback / softback

Tellinger reveals how numerous, 200,000-year-old sites in South Africa perfectly match Sumerian descriptions of Abzu, the land of the First People - including the vast gold-mining operations of the Anunnaki from the 12th planet, Nibiru and the city of Anunnaki leader Enki. With aerial photographs, Tellinger shows how the extensive stone circle and road complexes are laid out according to the principles of sacred geometry and represent the remains of Tesla-like technology used to generate energy and carve immensely long tunnels straight into the Earth in search of gold - tunnels that still exist and whose origins had been a mystery until now.

He reveals, with photographic evidence, that the human civilisation spawned by the Anunnaki was the first to create many totems of ancient Egypt, such as the Horus bird, the Sphinx, the Ankh and large pyramids, as well as construct an accurate stone calendar, at the heart of their civilisation, aligned with the Orion constellation.

He explores how their petroglyphs, carved into the hardest rock, are nearly identical to the hieroglyphs of Sumerian seals.

Reveals how these 200,000-year-old sites perfectly match Sumerian descriptions of the gold mining operations of the Anunnaki and the city of Enki.