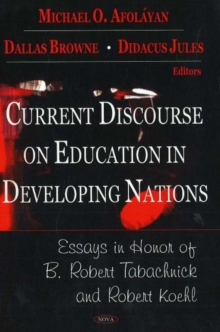 Comparative studies receive relatively little attention in U.S. education. Comparative work done by people who are either international scholars or have spent extensive (and intensive) periods of time in international contexts rarely shows up on course syllabi or reading lists in most U.S. education courses. However, this volume is comprised of scholars at various phases of their careers -- early, mid, and late -- who have deep investments in issues of international and global education.

U.S. students do not know very much about the countries of Africa because these countries cannot be understood outside of the history and foreign policies that implicate the United States.

The same thing might be said of Latin America, the Caribbean, and increasingly Asia.

The only way that broader and more complex perspectives of the post-colonial world can emerge are in the presence of post-colonial voices.

Globalisation, for better or worse, is a part of our post-modern, postcolonial condition.

Unless we do systematic study of the way global forces impact material realities and our symbol systems we cannot make sense of our world and our place in it.

The responsibility for the study of the global, transnational, transcultural, and/or comparative does not reside merely on those we see as "other".

However, their perspectives cannot be marginalised in the discourse.

This collection contains a superb mixture of voices and perspectives from around the world.

But, it also contains a wonderful homage to two scholars, B Robert Tabachnick and Robert Koehl whose work represent the leading edge of comparative education.