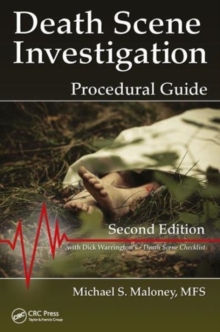 Those tasked with investigating death scenes come from a variety of backgrounds and varying levels of experience.

In addition, the book serves as an on-scene ready reference which includes instructions on procedure including the initial notification of a death, processing the scene and body, the investigator's role at autopsy, and analyzing the scene indicators to place evidence into context. Topics discussed include:Initial response and scene evaluationDeath scene management including documentation, sketching, photography, videography, observations, and search proceduresA special death investigation matrix that walks the investigator though a decision tree to help in ambiguous deaths Contains discussion of all manners of death, including accident, suicide, natural and homicideCoverage of recovery of human remains from open field, aquatic, and buried sites including estimating the time of death. Wound dynamics and mechanisms of injury that covers asphyxiation, sharp and blunt force trauma, chopping injuries; handgun, rifle, and shotgun wounds, electrical injuries, and moreThe bulleted format and spiral binding allows for easy use and reference in the field with sections that are self-contained and cross-referenced for quick searches.

With its thorough and detailed approach, Death Scene Investigation, Second Edition will be a must-have addition to any crime scene and death investigator's tool kit.