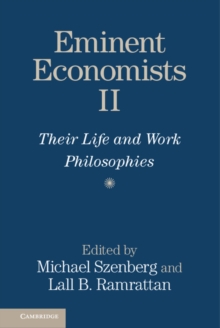 The sequel to Eminent Economists, this book presents the ideas of some of the most outstanding economists of the past half century.

The contributors, representing divergent points of the ideological compass, present their life philosophies and reflect on their conceptions of human nature, society, justice, and the source of creative impulse.

These self-portraits reveal details of the economists' personal and professional lives that capture the significance of the total person.

The essays represent streams of thought that lead to the vast ocean of economics, where gems of the discipline lie, and the volume will appeal to a wide array of readers, including professional economists, students and laypersons who seek a window into the heart of this complex field.