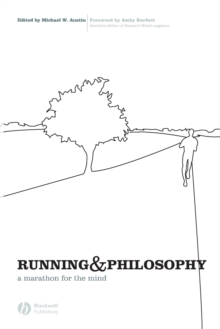 Running and Philosophy : A Marathon for the Mind Paperback / softback

A unique anthology of essays exploring the philosophical wisdom runners contemplate when out for a run.

It features writings from some of America's leading philosophers, including Martha Nussbaum, Charles Taliaferro, and J.P.

Moreland.* A first-of-its-kind collection of essays exploring those gems of philosophical wisdom runners contemplate when out for a run* Topics considered include running and the philosophy of friendship; the freedom of the long distance runner; running as aesthetic experience, and "Could a Zombie Run a Marathon?"* Contributing essayists include philosophers with athletic experience at the collegiate level, philosophers whose pasttime is running, and one philosopher who began running to test the ideas in his essay