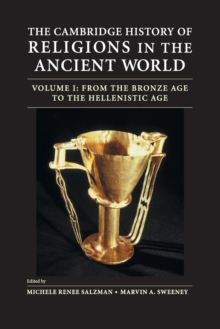 The Cambridge History of Religions in the Ancient World: Volume 1, From the Bronze Age to the Hellenistic Age Paperback / softback

The Cambridge History of Religions in the Ancient World provides a comprehensive and in-depth analysis of the religions of the ancient Near East and Mediterranean world.

The fourteen essays in Volume 1 begin in the third millennium BCE with the Sumerians and extend to the fourth century BCE through the fall of the Achaemenid Persian Empire and the demise of Alexander the Great.

Its contributors, all acknowledged experts in their fields, analyze a wide spectrum of textual and material evidence.

An introductory essay by the General Editor sets out the central questions, themes and historical trends considered in Volumes 1 and 2.

Marvin A. Sweeney provides an introduction to the chapters of Volume 1.

The regional and historical orientations of the essays will enable readers to see how a religious tradition or movement assumed a distinctive local identity, even as they view its development within a comparative framework.

Supplemented with maps, illustrations and detailed indexes, the volume is an excellent reference tool for scholars of the ancient Near East and Mediterranean world.