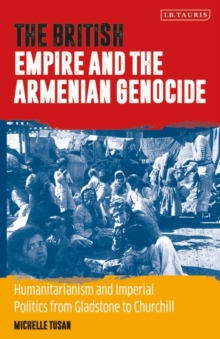 The British Empire and the Armenian Genocide : Humanitarianism and Imperial Politics from Gladstone to Churchill Paperback / softback

An estimated one million Armenians were killed in the dying days of the Ottoman Empire in 1915.

Against the backdrop of World War I, reports of massacre, atrocity, genocide and exile sparked the largest global humanitarian response up to that date.

Britain and its empire - the most powerful internationalist institutional force at the time - played a key role in determining the global response to these events. This book considers the first attempt to intervene on behalf of the victims of the massacres and to prosecute those responsible for 'crimes against humanity' using newly uncovered archival material.

It looks at those who attempted to stop the violence and to prosecute the Ottoman perpetrators of the atrocities.

In the process it explores why the Armenian question emerged as one of the most popular humanitarian causes in British society, capturing the imagination of philanthropists, politicians and the press.

For liberals, it was seen as the embodiment of the humanitarian ideals espoused by their former leader (and four-time Prime Minister), W.E.

Gladstone. For conservatives, as articulated most clearly by Winston Churchill, it proved a test case for British imperial power. In looking at the British response to the events in Anatolia, Michelle Tusan provides a new perspective on the genocide and sheds light on one of the first ever international humanitarian campaigns.