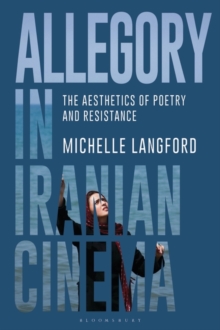 Allegory in Iranian Cinema : The Aesthetics of Poetry and Resistance Hardback

Iranian filmmakers have long been recognised for creating a vibrant, aesthetically rich cinema whilst working under strict state censorship regulations.

As Michelle Langford reveals, many have found indirect, allegorical ways of expressing forbidden topics and issues in their films.

But for many, allegory is much more than a foil against haphazardly applied censorship rules.

Drawing on a long history of allegorical expression in Persian poetry and the arts, allegory has become an integral part of the poetics of Iranian cinema.

Allegory in Iranian Cinema explores the allegorical aesthetics of Iranian cinema, explaining how it has emerged from deep cultural traditions and how it functions as a strategy for both supporting and resisting dominant ideology.

As well as tracing the roots of allegory in Iranian cinema before and after the 1979 revolution, Langford also theorizes this cinematic mode.

She draws on a range of cinematic, philosophical and cultural concepts - developed by thinkers such as Walter Benjamin, Gilles Deleuze, Pier Paolo Pasolini, Christian Metz and Vivian Sobchack - to provide a theoretical framework for detailed analyses of films by renowned directors of the pre-and post-revolutionary eras including Masoud Kimiai, Dariush Mehrjui, Ebrahim Golestan, Kamran Shirdel, Majid Majidi, Jafar Panahi, Marziyeh Meshkini, Mohsen Makhmalbaf, Rakhshan Bani-Etemad and Asghar Farhadi. Allegory in Iranian Cinema explains how a centuries-old means of expression, interpretation, encoding and decoding becomes, in the hands of Iran's most skilled cineastes, a powerful tool with which to critique and challenge social and cultural norms.