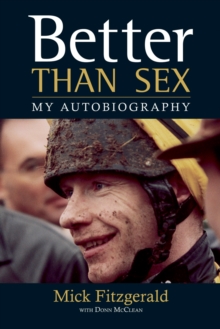 When you think of Mick Fitzgerald, you might think of his masterful ride on Rough Quest to win the 1996 Grand National, or his interview with Des Lynam live on BBC afterwards: 'After that, Des, even sex is an anti-climax'.

You might think of his victories in the Cheltenham Gold Cup, the Champion Chase, the Triumph Hurdle or the Hennessy Gold Cup because, as one of the most accomplished jump jockeys ever to throw his leg over a saddle, Fitzgerald has just about done it all.In "Better Than Sex", Fitzgerald tells his story with a candidness that is both rare and refreshing.

He provides a unique insight into life as a jockey, the struggles, the temptations, the victories, the celebrations.

He tells openly of his failed marriage, of riding for the Queen, and about how the racing game has changed irrevocably during the 19 years since he crossed the Irish Sea.