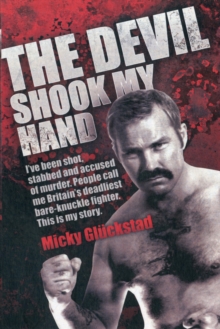 The Devil Shook My Hand : I've Been Shot, Stabbed and Accused of Murder. People Call Me Britain's Deadliest Bare-knuckle Fighter. This is My Story. Paperback / softback

Meet Micky Gluckstad. You'll like him. Bare-knuckle boxer, East End face, playboy and underworld 'corner merchant', Micky's conned money off the best of them - and he's got the scars to prove it. A happy-go-lucky conman who fleeced hundreds of thousands of pounds from the rich, the stupid, the crooked and the shameless, Micky's one of the nicest men you'll ever meet - unless you cross him.

Then beware. There are properly hard men and there is Micky Gluckstad. Whether on the cobbles or in the ring, Micky beat them all.

Roy 'Pretty Boy' Shaw, Donny 'The Bull' Adams and even Lenny McLean, The Guv'nor himself, fell before Micky's onslaught.

He never started a fight, but he never walked away from one either and he hated bullies and braggarts.

Reggie Kray said Micky could have been one of the boxing greats, but he never trained and fought for kicks and cash. Despite his incredible story, you won't catch him boasting about his exploits or cashing in as a rent-a-villain.

Repeatedly accused of murder but never charged, shot, stabbed and glassed, beaten by the police and locked up in juvenile detention, borstal and prison, he came back laughing from everything the world threw at him.