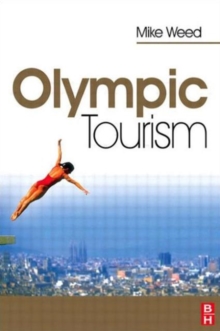 Olympic Tourism is the first text to focus on the nature of Olympic tourism and the potential for the Olympic Games to generate tourism in the run up to and long after the hosting of a Games.

The awarding of the 2012 Olympics to London will see an increasing interest in the phenomena of organising, managing and analysing the issues which surround mega-event sport tourism.

This text will address these issues and using detailed case analysis of previous and future games, discuss how to maximise the success of managing tourism at these events.

Written from an international perspective this text provides the reader with:An exploration of the relationship between sport, tourism and the Olympic GamesA guide on how to establish Olympic tourism as a phenomenon that goes far beyond the visits of spectators, athletes, officials and dignitaries during the Games themselves. An examination of the detail of Olympic tourism flows before, during and after the GamesAnalysis of the requisite partnerships between a range of sport, tourism, Olympic and other agencies to successfully leverage and deliver maximum tourism benefitsThe tools to draw lessons from case studies of previous and forthcoming winter and summer Olympic Games in the 21st CenturyA discussion of the potential tourism legacies of the Olympic GamesOlympic Tourism is a timely response to this international interest and will be an essential resource for those studying and teaching on sport, tourism and the Olympics.