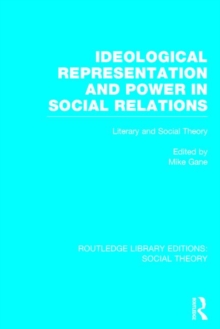 This collection reflects the French influence on literary and representational theory which has been predominant in recent years.

It contains stimulating essays on the fiction of Perault, Borges, James, Eco and Tournier.

These are complemented by theoretical essays on power and representation which provide powerful critiques of Barthes, Derrida, Deleuze and Marin, writers central to the contemporary debate.

Finally, two perceptive essays reflect upon and attempt to redirect current theory, drawing on and confronting the writings of Michel Foucault.