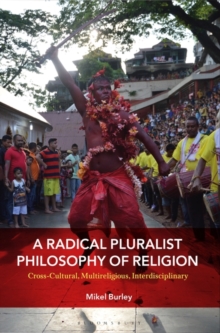 This book is a unique introduction to studying the philosophy of religion, drawing on a wide range of cultures and literary sources in an approach that is both methodologically innovative and expansive in its cross-cultural and multi-religious scope.

Employing his expertise in interdisciplinary and Wittgenstein-influenced methods, Mikel Burley draws on works of ethnography and narrative fiction, including Dostoevsky's The Brothers Karamazov and Soyinka's Death and the King's Horseman, to critically engage with existing approaches to the philosophy of religion and advocate a radical, pluralist approach.

Breaking away from the standard fixation on a narrow construal of theism, topics discussed include conceptions of compassion in Buddhist ethics, cannibalism in mortuary rituals, divine possession and animal sacrifice in Hindu Goddess worship and animism in indigenous traditions. Original and engaging, Burley's synthesis of philosophical, anthropological and literary elements expands and diversifies the philosophy of religion, providing an essential introduction for anyone interested in studying the radical plurality of forms that religion takes in human life.