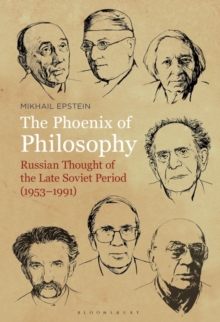 The Phoenix of Philosophy : Russian Thought of the Late Soviet Period (1953-1991) Hardback

This groundbreaking work by one of the world's foremost theoreticians of Russian literature, culture, and thought gives for the first time an extensive and detailed examination of the development of Russian thought during the late Soviet period.

Countering the traditional view of an intellectual wilderness under the Soviet regime, Mikhail Epstein offers a systematic account of Russian thought in the second half of the 20th century. In doing so, he provides new insights into previously ignored areas such as Russian liberalism, personalism, structuralism, neo-rationalism, and culturology. Epstein shows how Russian philosophy and culture has long been trapped in an intellectual prison of its own making as it sought to create its own utopia.

However, he demonstrates that it is time to reappraise Russian philosophical thought and cultural theory, now freed from the bonds of totalitarianism.

We are left with not only a new and exciting interpretation of Russian thought, but also an opportunity to rethink our own intellectual heritage.