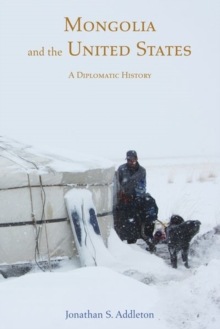 Mongolia and the United States : A Diplomatic History Hardback

For its part, the United States has supported Mongolia as an emerging democracy while fostering development and commercial relations.

People-to-people ties have significantly expanded in recent years, as has a security partnership that supports Mongolia's emergence as a provider of military peacekeepers under the U.N. flag in Sierra Leone, Chad, Kosovo, Darfur, South Sudan, and elsewhere. While focusing on diplomatic relations over the last quarter century, Addleton also briefly describes American encounters with Mongolia over the past 150 years.

More recently, Mongolia has emerged as a magnet for foreign investment, making it one of the world's fastest growing economies.