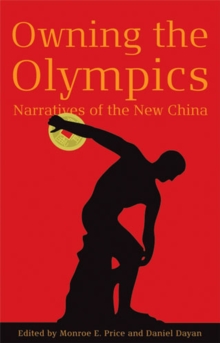 Owning the Olympics : Narratives of the New China Paperback / softback

Months before the Opening Ceremonies, in August 2008, it is clear that the Beijing Olympics are a significant media event.

However, in contrast to traditional media events as defined by Daniel Dayan and Elihu Katz in their classic study, ""Media Events"", the Beijing Olympics are taking place in a very different global media environment.

The dramatic expansion of media outlets and the growth of mobile technology have both changed the collective nature of media events and made it increasingly difficult to regulate and control their meaning.

This is exemplified by the controversies that have defined the run-up to Beijing 2008.

As many Western commentators have observed, the People's Republic of China is seizing the Olympics as an opportunity to reinvent itself as the ""New China,"" a global leader distinguished by economic power, a sophisticated technological infrastructure, environmental stewardship, and an improving human-rights record.But China's efforts to use the Olympics to position itself in the new century have been hotly contested by many global actors, including prominent human rights advocates.

The essays in this collection survey these efforts to define the meaning of the Beijing Olympics from a variety of disciplinary and thematic perspectives.

Bringing together a distinguished group of scholars from architecture, Chinese studies, human rights, sports studies, information policy and media studies, law, and political science, ""Owning the Olympics"" offers an accessible and sophisticated framework with which to understand the ongoing struggles by which multiple entities such as the International Olympic Committee, the Beijing Organizing Committee (BOCOG), corporate sponsors, media organizations, human rights organizations, and the Chinese Communist Party itself are seeking to influence and control the narratives through which these Games will be understood.""Owning the Olympics"" will be appeal to media professionals, policy analysts, and scholars from a variety of disciplines, including communications, East Asian studies, politics, and cultural studies.