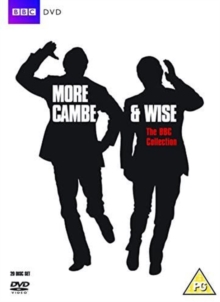 All nine complete series plus the five Christmas specials of the long-running BBC variety show presented by Eric Morecambe and Ernie Wise.

Based around irreverent stand-up routines, comedy sketches and comical song and dance numbers involving a stream of beleaguered guests, the show ran for nearly a decade from 1968 to 1977 and included sketches such as 'Singin' in the Rain' and 'The Breakfast Stripper'.