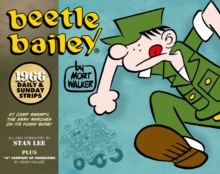 Set in a fictitious United States Army base called Camp Swampy, "Beetle Bailey" collects the daily strip adventures, or lack of them, of Private Bailey.

He is a lazy, bone-idle shirker of almost epic proportions and his Herculean efforts to avoid work and his eternal quest for sleep are much to the chagrin of his long-suffering nemesis Sergeant Snorkel.

It comes with an introduction by Stan Lee.