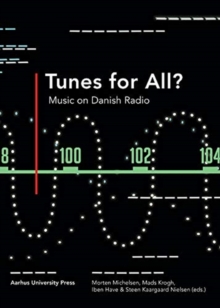 Tunes for all? : Music on Danish radio Paperback / softback

In ten original essays, Danish music and media scholars discuss aspects of music on the radio from the 1920s until today.

Understanding music radio as a distributed phenomenon or as a multiplicity, the authors draw upon anthropology, cultural studies and media studies along with sociological and historiographical theory.

The intention is to further develop interdisciplinary approaches that may grasp the complex interrelations between radio as an institution and as practices on the one hand and music, musical practices, and musical life on the other. The essays' examples and cases are all related to the Danish Broadcasting Corporation (DR) and offer a music radio production perspective.

They span the period from when broadcast music was only live to today where almost all of it is prerecorded and digitized.

Some of the essays approach broad topics like early music radio's contributions to the regulation of national centres and peripheries, the debates on music radio as mechanical music, and the general changes in music repertoires and in the status of the institution's live ensembles.

Music radio's roles as gatekeeper through automatic music programming are discussed in several articles as are the many ways music genres and radio formats interact.

Some of the authors turn to detailed analyses at programme level in order to explain aspects of modern music radio and to suggest analytical models.

The essays come with an introduction consisting of an extended overview of international music radio studies since the 1930s, and overview of the development of Danish music radio, and a theoretical preamble.