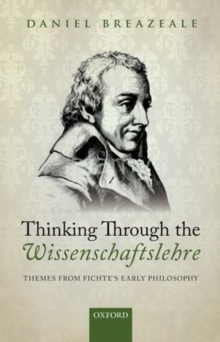 Thinking Through the Wissenschaftslehre : Themes from Fichte's Early Philosophy Hardback

Daniel Breazeale presents a critical study of the early philosophy of J.G.

Fichte, and the version of the Wissenschaftslehre or 'doctrine of science' that Fichte developed in Jena between 1794 and 1799.

The book is intended to assist serious readers in their efforts to understand Fichte's philosophy within the context of its own era and to orient them in the ongoing scholarly debates concerning the character and significance of theWissenschaftslehre.

Breazeale focuses on explaining what Fichte was (and was not) trying to accomplish and precisely how he proposed to accomplish this, as well as upon the difficulties implicit in his project and his often novel strategies for overcoming them.

To this end, the volume addresses a variety of specific themes, issues,and problems that will be familiar to any student of Fichte's early writings and which continue to be fiercely debated by his interpreters.

These include: the relationship of the finite human self to the purely self-positing I, transcendental philosophy as a 'pragmatic history of the mind', Fichte's 'synthetic' method of philosophizing, the standpoint of life vs. the standpoint of speculation, the extra-philosophical presuppositions and implications of the Wissenschaftslehre, thedifferent senses of 'intellectual intuition' in Fichte's early writings, the controversial doctrine of the 'check' (Anstoss) upon the free actions of the I, the various theoretical and practical tasks of philosophy, the refutation of dogmatism and the 'choice' of a philosophical standpoint, the relationship oftranscendental idealism to skepticism, the interests of reason, and the problematic 'primacy of the practical' in Fichte's thought. 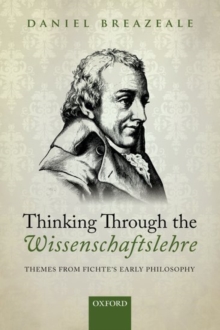