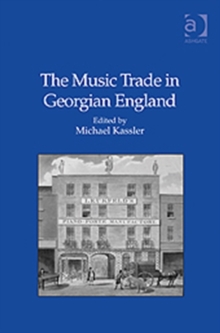 In contrast to today's music industry, whose principal products are recorded songs sold to customers round the world, the music trade in Georgian England was based upon London firms that published and sold printed music and manufactured and sold instruments on which this music could be played.

The destruction of business records and other primary sources has hampered investigation of this trade, but recent research into legal proceedings, apprenticeship registers, surviving correspondence and other archived documentation has enabled aspects of its workings to be reconstructed. The first part of the book deals with Longman & Broderip, arguably the foremost English music seller in the late eighteenth century, and the firm's two successors - Broderip & Wilkinson and Muzio Clementi's variously styled partnerships - who carried on after Longman & Broderip's assets were divided in 1798.

The next part shows how a rival music seller, John Bland, and his successors, used textual and thematic catalogues to advertise their publications.

This is followed by a comprehensive review of the development of musical copyright in this period, a report of efforts by a leading inventor, Charles 3rd Earl Stanhope, to transform the ways in which music was printed and recorded, and a study of Georg Jacob Vollweiler's endeavour to introduce music lithography into England. The book should appeal not only to music historians but also to readers interested in English business history, publishing history and legal history between 1714 and 1830.