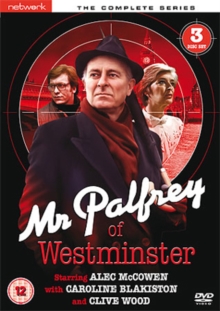 All ten episodes from both series of the 1980s Cold War spy drama.

Taking his orders from a female superior known only as 'Co-ordinator' (Caroline Blakiston), Palfrey is assisted in the nastier aspects of his assignments by his ruthless younger colleague, Blair (Clive Wood).

Episodes comprise: 'Once Your Card Is Marked', 'The Honeypot and the Bees', 'The Defector', 'A Present from Leipzig', 'Freedom from Longing', 'Return to Sender', 'Music of a Dead Prophet', 'Official Secret', 'Spygame' and 'The Baited Trap'.