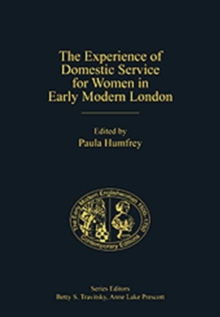 Exposed here are the contractual underpinnings of domestic service for women; the mobility that domestic servants enjoyed; and the concern that this mobility generated in the authorities.

Paid domestic work has traditionally been regarded by historians simply as a pre-marital phase of women's lives.

In fact, the depositions in this volume show that service was a prototypical form of female wage labour. While some women left service once they married, others relied on domestic positions as an avenue to generating income as life-long single women, as married women, and as widows. Even though they usually lived in poverty, labouring women who worked as servants in London had considerably more agency than has earlier been recognized.

Female servants who deposed before London ecclesiastical and parish courts three centuries ago were mostly non-literate.

Strikingly, their individual voices are clear and distinct as they present information about their working and personal circumstances.