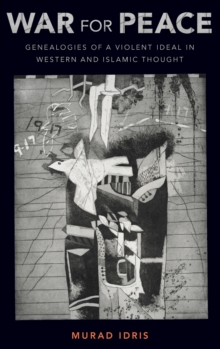 War for Peace : Genealogies of a Violent Ideal in Western and Islamic Thought Hardback

Peace is a universal ideal, but its political life is a great paradox: "peace" is the opposite of war, but it also enables war.

If peace is the elimination of war, then what does it mean to wage war for the sake of peace?

What does peace mean when some say that they are committed to it but that their enemies do not value it?

Why is it that associating peace with other ideals, like justice, friendship, security, and law, does little to distance peace from war?

Although political theory has dealt extensively with most major concepts that today define "the political" it has paid relatively scant critical attention to peace, the very concept that is often said to be the major aim and ideal of humanity.

In War for Peace, Murad Idris looks at the ways that peace has been treated across the writings of ten thinkers from ancient and modern political thought, from Plato to Immanuel Kant and Sayyid Qutb, to produce an original and striking account ofwhat peace means and how it works.

Idris argues that peace is parasitical in that the addition of other ideals into peace, such as law, security, and friendship, reduces it to consensus and actually facilitates war; it is provincial in that its universalized content reflects particularistic desires andfears, constructions of difference, and hierarchies within humanity; and it is polemical, in that its idealization is not only the product of antagonisms, but also enables hostility.

War for Peace uncovers the basis of peace's moralities and the political functions of its idealizations, historically and into the present.

This bold and ambitious book confronts readers with the impurity of peace as an ideal, and the pressing need to think beyond universal peace.