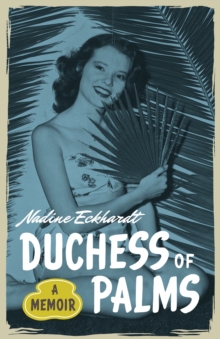 Duchess of Palms : A Memoir Hardback

Child of the Great Depression, teenage "Duchess of Palms" beauty queen, wife of an acclaimed novelist and later of a brilliant U.S. congressman, and ultimately a successful single working woman and mother, Nadine Eckhardt has lived a fascinating life.

In this unique, funny, and honest memoir, she recounts her journey from being a "fifties girl" who lived through the men in her life to becoming a woman in her own right, working toward her own goals. Eckhardt's first marriage to writer Billy Lee Brammer gave her entree to liberal political and literary circles in Austin and Washington, where she and Brammer both worked for Senator Lyndon B.

Johnson. She describes the heady excitement of LBJ's world-a milieu that Brammer vividly captured in his novel The Gay Place.

She next recalls her second marriage to Bob Eckhardt, whom she helped get elected to the U.S.

House of Representatives, as well as her growing involvement with the counterculture of social protest, sexual revolution, and drug use.

Eckhardt honestly recounts how the changing times changed her perception of herself, recalling that "I didn't know how to achieve for myself, only for others, and I felt ripped off and empty." This painful realization opened the door to a new life for Eckhardt.

Her memoir concludes with a joyful description of her multifaceted later life as a restaurateur, assistant to Molly Ivins, writer, and center of a wide circle of friends.