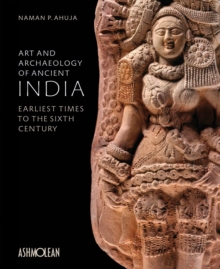 Art and Archaeology of Ancient India : Earliest Times to the Sixth Century Hardback

The Ashmolean Museum is fortunate in having the most comprehensive British collection of the art of the Indian subcontinent outside London.

Especially strong in sculpture, this rich representation of Indian art from prehistory to the twentieth century has come about through the generosity of our benefactors over more than three centuries.

The Museum's first major Indian sculpture acquisition, a stone Pala-style Vishnu image of the eleventh century, was given in 1686 by Sir William Hedges, a governor of the East India Company in Bengal.

From the late nineteenth century, a substantial core of the present collection was assembled at the University's former Indian Institute Museum (1897-1962), precursor of the Department of Eastern Art, which opened within the Ashmolean in 1963.

Since that date many more Indian objects of all periods have been acquired by gift, bequest or purchase.