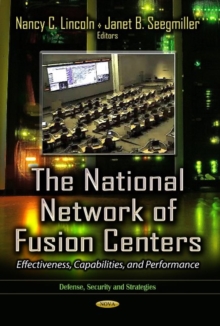 In the aftermath of the information sharing failures leading to the September 11, 2001 terrorist attacks that killed nearly 3,000 people in New York City, at the Pentagon, and in a Pennsylvania field, states and localities across the United States established what are known today as State and Major Urban Area Fusion Centers.

Collectively known as the National Network of Fusion Centers, many of these (now numbering 78) fusion centres are still in their infancy.

In the wake of these attacks, we have come to understand that homeland security, including counter-terrorism efforts, must be a national responsibility, a true and equal partnership across all levels of government, and inclusive of the American people themselves.

A top down, wholly federal approach simply does not and cannot suffice.

This book provides a comprehensive study of the National Network of Fusion Centers in an effort to understand current strengths and gaps and provide recommendations for improvement.