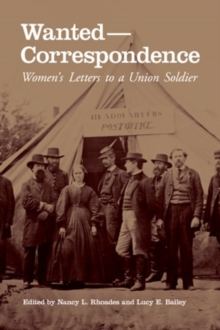 Wanted-Correspondence is a unique collection of more than 150 letters written to an Ohio serviceman during the American Civil War offers glimpses of women's lives as they waited, worked, and wrote from the Ohio home front.

The letters reveal fascinating details of the lives of mostly young, single women-friends, acquaintances, love interests, and strangers who responded to one Union soldier's advertisement for cor respondents.

Almost all of the women who responded to Lieutenant Edwin Lewis Lybarger's lonely-hearts newspaper advertisement lived in Ohio and supported the Union.

Lybarger carried the collection of letters throughout three years of military service, preserved them through his life, and left them to be discovered in an attic trunk more than a century after Lee's surrender.

Women's letter writing functioned as a form of \u201cwar work\u201d that bolstered the spirits of enlisted men and \u201ckinship work\u201d that helped forge romantic relationships and sustain community bonds across the miles.

While men's letters and diaries abound in Civil War history, less readily available are comprehensive collections of letters from middle-class and rural women that survived the weathering of marches, camp life, and battles to emerge unscathed from men's knapsacks at war's end.

The collection is accompanied by a detailed editorial introduction that highlights significant themes in the letters.

Together, they contribute to the still-unfolding historical knowledge concerning Northern women's lives and experiences during this significant period in American history.