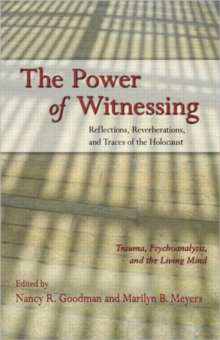 The Power of Witnessing : Reflections, Reverberations, and Traces of the Holocaust: Trauma, Psychoanalysis, and the Living Mind Paperback / softback

Witnessing comes in as many forms as the trauma that gives birth to it.

The Holocaust, undeniably one of the greatest traumatic events in recent human history, still resonates into the twenty-first century.

The echoes that haunt those who survived continue to reach their children and others who did not share the experience directly.

In what ways is this massive trauma processed and understood, both for survivors and future generations?The answer, as deftly illustrated by Nancy Goodman and Marilyn Meyers, lies in the power of witnessing: the act of acknowledging that trauma took place, coupled with the desire to share that knowledge with others to build a space in which to reveal, confront, and symbolize it.

As the contributors to this book demonstrate, testimonial writing and memoir, artwork, poetry, documentary, theater, and even the simple recollection of a memory are ways that honor and serve as forms of witnessing.

Each chapter is a fusion of narrative and metaphor that exists as evidence of the living mind that emerges amid the dead spaces produced by mass trauma, creating a revelatory, transformational space for the terror of knowing and the possibility for affirmation of hope, courage, and endurance in the face of almost unspeakable evil.

Additionally, the power of witnessing is extended from the Holocaust to contemporary instances of mass trauma and to psychoanalytic treatments, proving its efficacy in the dyadic relationship of everyday practice for both patient and analyst. The Holocaust is not an easy subject to approach, but the intimate and personal stories included here add up to an act of witnessing in and of itself, combining the past and the present and placing the trauma in the realm of knowing, sharing, and understanding. Contributors: Harriet Basseches, Elsa Blum, Bridget Conley-Zilkic, Paula Ellman, Susan Elmendorf, George Halasz, Geoffrey Hartman, Renee Hartman, Elaine Neumann Kulp-Shabad, Dori Laub, Clemens Loew, Gail Humphries Mardirosian, Margit Meissner, Henri Parens, Arlene Kramer Richards, Arnold Richards, Sophia Richman, Katalin Roth, Nina Shapiro-Perl, Myra Sklarew, Ervin Staub.