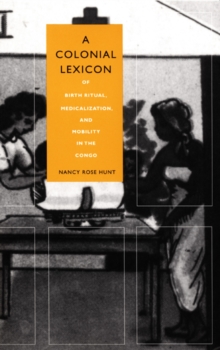 A Colonial Lexicon : Of Birth Ritual, Medicalization, and Mobility in the Congo Hardback

A Colonial Lexicon is the first historical investigation of how childbirth became medicalized in Africa.

Rejecting the "colonial encounter" paradigm pervasive in current studies, Nancy Rose Hunt elegantly weaves together stories about autopsies and bicycles, obstetric surgery and male initiation, to reveal how concerns about strange new objects and procedures fashioned the hybrid social world of colonialism and its aftermath in Mobutu's Zaire. Relying on archival research in England and Belgium, as well as fieldwork in the Congo, Hunt reconstructs an ethnographic history of a remote British Baptist mission struggling to survive under the successive regimes of King Leopold II's Congo Free State, the hyper-hygienic, pronatalist Belgian Congo, and Mobutu's Zaire.

After exploring the roots of social reproduction in rituals of manhood, she shows how the arrival of the fast and modern ushered in novel productions of gender, seen equally in the forced labor of road construction and the medicalization of childbirth.

Hunt focuses on a specifically interwar modernity, where the speed of airplanes and bicycles correlated with a new, mobile medicine aimed at curbing epidemics and enumerating colonial subjects.

Fascinating stories about imperial masculinities, Christmas rituals, evangelical humor, colonial terror, and European cannibalism demonstrate that everyday life in the mission, on plantations, and under a strongly Catholic colonial state was never quite what it seemed.

In a world where everyone was living in translation, privileged access to new objects and technologies allowed a class of "colonial middle figures"-particularly teachers, nurses, and midwives-to mediate the evolving hybridity of Congolese society.

Successfully blurring conventional distinctions between precolonial, colonial, and postcolonial situations, Hunt moves on to discuss the unexpected presence of colonial fragments in the vibrant world of today's postcolonial Africa. With its close attention to semiotics as well as sociology, A Colonial Lexiconwill interest specialists in anthropology, African history, obstetrics and gynecology, medical history, religion, and women's and cultural studies. 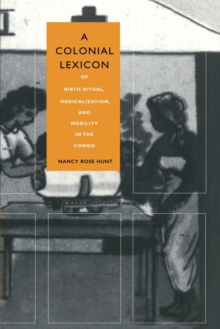 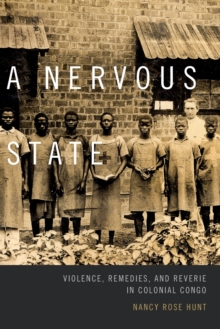 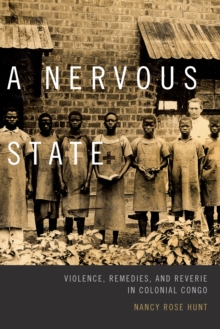