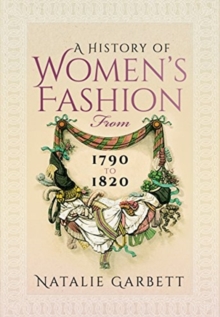 The Empire Line is perhaps the most familiar historical style dress, now synonymous with the ever popular adaptations of Jane Austens novels.

It was the first fashion trend to be adopted by a wider portion of society, due in part to its simplistic form, and also the use of cheaper mass produced fabrics courtesy of the Industrial Revolution.

Unlike in previous centuries, this new design was the first to not require corsetry or other artificial means to create form and structure, thus adding further to its mass appeal.

This was also the age when the first illustrated ladies magazines were published, illustrating new styles that then paved the way for how todays fashion iscommunicated and consumed. The author examines the thirty-year journey of the Empire Line dress, discussing how it was influenced by key political, social and economic events such as the Napoleonic Wars and investigating its journey from its origins during the French Revolution, to its conclusion by the 1820s.

New light is shed on the evolution of ladies fashion by examining previously unavailable primary sources, including patterns of extant garments, accessories from private collections, contemporary accounts and fashion plates.

From stays to shifts, bonnets to reticules, each chapterexplains in practical terms how fashion was worn; creating a concise picture that includes every component of a ladies wardrobe.

In an age made famous by Jane Austen, Byron, Wellington and Napoleon, there was a brief but pivotal moment in the evolution of fashion the Empire Line.