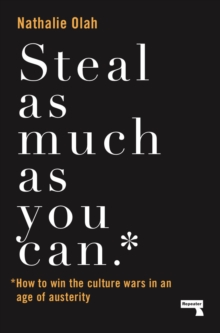 Steal As Much As You Can : How to Win the Culture Wars in an Age of Austerity Paperback / softback

The 2010s have been a double-edged decade. Socioeconomic factors have led to the widespread and increased disenfranchisement of poorer people from the mainstream media and the institutions shaping it.

This has coincided with a growing number of people from low income backgrounds also receiving better educations than ever before, and having the means at their disposal to both name and resent it.

Steal as much as you can is the story of how this bright generation came to be, and what effective means are still at their disposal to challenge the establishment and ultimately win.

By rejecting the established routines of achieving prosperity, and by stealing what you can from them on the way, this book offers hope to anyone who feels increasingly frustrated by our increasingly unequal society.