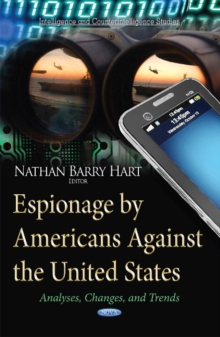 Espionage by Americans is the worst outcome of insider trust betrayal.

The Defense Personnel Security Research Center (PERSEREC) monitors and analyses espionage by Americans in order to improve understanding of such trust betrayal by a tiny minority of citizens.

The focus of this book is on changes and trends in espionage by Americans since 1990, compared with two earlier cold War periods.

Findings include, offenders since 1990 are more likely to be naturalised citizens, and to have foreign attachments, connections, and ties, and therefore they are more likely to be motivated to spy from divided loyalties; money has declined as a primary motive for espionage although it is still common, and since 2000 no American is known to have received payment for spying; many recent spies have relied on computers, electronic information retrieval and storage, and the Internet.

The most recent cases suggest that global terrorism is influencing the crime of espionage by Americans, and that espionage statutes need revision.