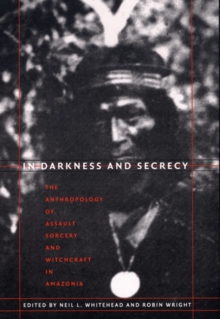 In Darkness and Secrecy : The Anthropology of Assault Sorcery and Witchcraft in Amazonia Hardback

This collection challenges that assumption by showing that dark shamans are, in many Amazonian cultures, quite different from shamanic healers and prophets.

Assault sorcery, in particular, involves violence resulting in physical harm or even death.

While highlighting the distinctiveness of such practices, In Darkness and Secrecy reveals them as no less relevant to the continuation of culture and society than curing and prophecy.

The contributors suggest that the persistence of dark shamanism can be understood as a form of engagement with modernity.These essays, by leading anthropologists of South American shamanism, consider assault sorcery as it is practiced in parts of Brazil, Guyana, Venezuela, and Peru.

They analyze the social and political dynamics of witchcraft and sorcery and their relation to cosmology, mythology, ritual, and other forms of symbolic violence and aggression in each society studied.

They also discuss the relations of witchcraft and sorcery to interethnic contact and the ways that shamanic power may be co-opted by the state.