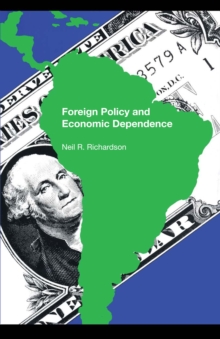 In an era of increasing interdependence among nations, the foreign policies of poor countries are becoming a subject of critical interest to scholars and the public alike.

Neil R. Richardson adopts a political economy perspective to examine the foreign policy repercussions of international economic dependence. Are dependent countries compliant in their foreign policies, acquiescing to the preferences of the industrial giants on which they rely for foreign trade, investment, and aid revenues? Or are they instead prepared to defy their dominant economic partners?

These are the major concerns of Richardson's rigorous investigation. The book begins with a characterization of economic dependence and its possible impact on the foreign policy decisions of dependent governments.

Ideas from both "interdependence" and dependencia scholarship are extracted in order to explain the reliance of poor countries on their rich partners.

These economics are linked to the foreign policies of poorer countries by considering how the mechanisms of dependence may create pressures on foreign policymakers.

Several combinations of pressures are plausible, and each set yields a differing expectation about their foreign policies. The second part of the book is an empirical test of these foreign policy predictions for the years 1950-1973.

Richardson analyzes the foreign policy behavior (as reflected in certain votes in the United Nations General Assembly) of a number of poor countries that are economically dependent on the United States to varying degrees. The results suggest several surprising conclusions.

Contrary to one common assumption, these mostly Latin American and Caribbean countries are not necessarily locked into a condition of perpetual dependence.

Richardson finds that the foreign policies of the economic dependencies are not easily manipulated by the United States.

Not only do annual changes in their external economic reliance fail to correspond to their U.N. voting behavior, but the dependencies as a group are no longer clear voting allies of the United States after the late 1960s.

These and other results bear theoretical and policy implications that conclude the book. Foreign Policy and Economic Dependence will be of interest to specialists in quantitative international relations and American foreign policy.