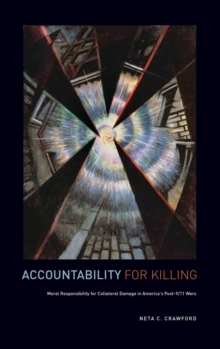 In May 2009, American B-1B bombers dropped 2,000-pound and 500-pound bombs in the village of Garani, Afghanistan following a Taliban attack. The dead included anywhere from twenty five to over one hundred civilians.

The U.S. military went into damage control mode, making numerous apologies to the Afghan government and the townspeople.

Afterward, the military announced that it would modify its aerial support tactics.

This episode was hardly an anomaly. As anyone whohas followed the Afghanistan war knows, these types of incidents occur with depressing regularity. Indeed, as Neta Crawford shows in Accountability for Killing, they are intrinsic to the American way of warfare today. While the military has prioritized reducing civilian casualties, it has not comeclose to eliminating them despite significant progress in recent years, for a very simple reason: American reliance on airpower and, increasingly, drone technology, which is intended to reduce American casualties.

Yet the long distance from targets, the power of the explosives, and the frequency of attacks necessarily produces civilian casualties over the course of a long war.

Deliberate killing of civilians is outlawed and international law blames individual soldiers and commanders for such killing.

But also under international law, civilian killing may be forgiven if it was unintended andincidental to a militarily necessary operation.

Given the nature of contemporary war, though, Crawford contends that this argument is no longer satisfactory.

As she demonstrates, 'unintended' deaths of civilians are too often dismissed as unavoidable, inevitable, and accidental.

Yet essentially, the verylaw that protects noncombatants from deliberate killing allows unintended killing.

An individual soldier may be sentenced life in prison or death for deliberately killing even a small number of civilians, but the large scale killing of dozens or even hundreds of civilians may be forgiven if it was unintentional-'incidental' to a military operation.

She focuses on the causes of these many episodes of foreseeable collateral damage and the moral responsibility for them.

Why was there so muchunintended killing of civilians in the U.S. wars zones in Afghanistan, Iraq and Pakistan? Is 'collateral damage' simply an unavoidable consequence of all wars?

Why, when the U.S. military tries so hard to limit collateral damage, does so much of it seem to occur?

Trenchant, original, and ranging acrosssecurity studies, international law, ethics, and international relations, Accountability for Killing will reshape our understanding of the ethics of contemporary war.