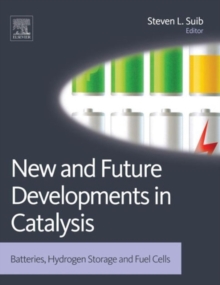 New and Future Developments in Catalysis is a package of seven books that compile the latest ideas concerning alternate and renewable energy sources and the role that catalysis plays in converting new renewable feedstock into biofuels and biochemicals.

Both homogeneous and heterogeneous catalysts and catalytic processes will be discussed in a unified and comprehensive approach.

There will be extensive cross-referencing within all volumes. Batteries and fuel cells are considered to be environmentally friendly devices for storage and production of electricity, and they are gaining considerable attention.

The preparation of the feed for fuel cells (fuel) as well as the catalysts and the various conversion processes taking place in these devices are covered in this volume, together with the catalytic processes for hydrogen generation and storage.

An economic analysis of the various processes is also part of this volume and enables an informed choice of the most suitable process.