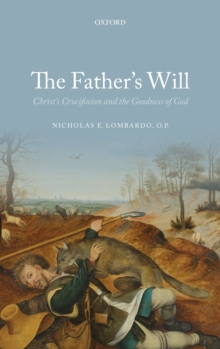 The Father's Will : Christ's Crucifixion and the Goodness of God Hardback

The night before his crucifixion, in the garden of Gethsemane, Jesus asks his Father to take away the cup of his suffering, but then says, "not my will, but yours, be done." Shortly afterward, Judas arrives, and his arrival reveals something important about the Father's will.

Yet much remains obscure. The sheer fact of Christ's crucifixion shows only that God was not willing to spare his Son.

It does not shed any light on the positive content of the Father's will. Drawing on philosophical analysis and historical-critical exegesis, The Father's Will sets out to clarify the Father's will for Christ and how it relates to his death on the cross.

Then, after considering the theologies of Anselm and Peter Abelard, it argues for the recovery of the early Christiancategory of ransom. Since Christians look to the crucifixion to make sense of their suffering, the Father's will for Christ relates to many existential questions; it also shapes the place of God the Father in Christian theology and culture.

Interpreting the crucifixion as a ransom makes the goodness of God more evident.

It also makes it easier to see God the Father as the author of our salvation, rather than a stern judge who must be placated. And since the category of ransom traces back to Jesus' saying in theGospels about giving his life "as a ransom for many" it has great claim to interpret the crucifixion in the way Jesus himself interpreted it.