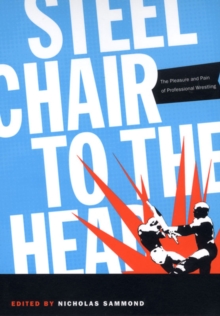 Steel Chair to the Head : The Pleasure and Pain of Professional Wrestling Hardback

The antagonists-oiled, shaved, pierced, and tattooed; the glaring lights; the pounding music; the shouting crowd: professional wrestling is at once spectacle, sport, and business.

Steel Chair to the Head provides a multifaceted look at the popular phenomenon of pro wrestling.

The contributors combine critical rigor with a deep appreciation of wrestling as a unique cultural form, the latest in a long line of popular performance genres.

They examine wrestling as it happens in the ring, is experienced in the stands, is portrayed on television, and is discussed in online chat rooms.

In the process, they reveal wrestling as an expression of the contradictions and struggles that shape American culture.The essayists include scholars in anthropology, psychology, film studies, communication studies, and sociology, one of whom used to wrestle professionally.