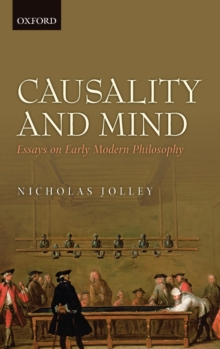 One theme is the continuing debate over the nature of causality in the period from Descartes to Hume.

Jolley shows that, despite his revolutionary stance, Descartes did no serious re-thinking about causality; it was left to his unorthodox disciple Malebranche to argue that there is no place for natural causality in the new mechanisticpicture of the physical world.

Several essays explore critical reactions to Malebranche's occasionalism in the writings of Leibniz, Berkeley, and Hume, and show how in their different ways Leibniz and Hume respond to Malebranche by re-instating the traditional view that science is the search for causes.

Asecond theme of the volume is the set of issues posed by Descartes' innovations in the philosophy of mind.

It is argued that Malebranche is once again a pivotal figure. In opposition to Descartes Malebranche insists that ideas, the objects of thought, are not psychological but abstract entities; he thus opposes Descartes' 'dustbin theory of the mind'. Malebranche also challenges Descartes' assumption that intentionality is a mark of the mental and his commitment to the superiority ofself-knowledge over knowledge of body. Other essays discuss the debate over innate ideas, Locke's polemics against Descartes' theory of mind, and the issue of Leibniz's phenomenalism.

A major aim of the volume is to show that philosophers in the period are systematic critics of their contemporaries andpredecessors.