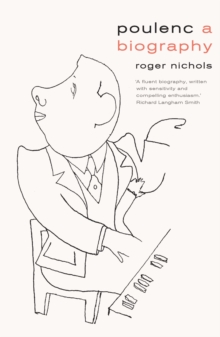 An authoritative account of the life and work of Francis Poulenc, one of the most prolific and striking figures in twentieth-century classical music

Francis Poulenc is a key figure in twentieth-century classical music, as well as an unorthodox and striking individual. Roger Nichols draws upon Poulenc's music and other primary sources to write an authoritative life of this great artist.

Although associated with five other French composers in what came to be called “Les Six”, Poulenc was very much sui generis in personality and in his music, where he excelled over a wide repertoire—opera, songs, ballet scores, chamber works, piano pieces, sacred and secular choral works, orchestral works and concertos. This book fully covers this wide range, while also describing the vicissitudes of Poulenc's life and the many important relationships he had with major figures such as Satie, Ravel, Stravinsky, Diaghilev, Cocteau and others.