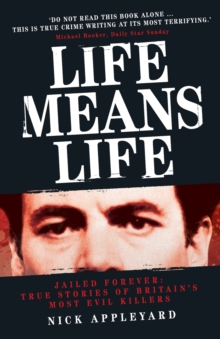 This book tells the stories of those most depraved killers whose crimes outraged society and demanded the harshest penalty available to a British court.

Among a UK prison population of close to 100,000, fewer than 40 men and women have been told they will end their days in a prison cell.

They range from men who crossed continents to slay youngsters, to contract killers who relished their grisly calling.

Some planned their killings in a sick and sadistic manner, others killed in an unanticipated explosion of rage, lust, greed or jealously.

But whatever their crime, whatever their motive, each of these beasts has one thing in common: they are the most evil people in our prison system. A graphic and harrowing read, this book is the first ever to bring together the case histories of every full-term lifer in Britain's jails.

It offers never-before-published information about these extraordinary offenders.

Police, lawyers and the relatives of the victims and killers all describe how the truth behind these awful crimes was pieced together and those responsible were brought to justice to face the harshest punishment. These are the 36 monsters deemed beyond redemption, who by their own hands forfeited the right to live among us, forever.

These are the killers whose crimes were such that society demanded that ...LIFE MEANS LIFE!