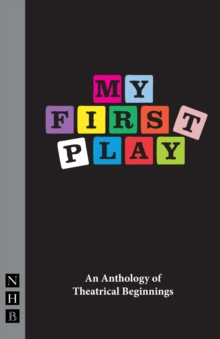 My First Play : An Anthology of Theatrical Beginnings Paperback / softback

My First Play is a unique collection of pieces by playwrights, actors and theatre directors - all of them regular Nick Hern Books authors - in response to the simplest of briefs: write about your first play. Candid, hilarious, and often sharply revealing, the resulting pieces - many of them written in the hurly-burly of work on a new production - combine to prove the power of theatre to entrance us, and hold us captive in its spell. Included here are remarkable first-person accounts from many of our leading playwrights: Caryl Churchill performing Cinderella to her parents with a cast of dolls and stuffed animals; Howard Brenton pinching his first main character from a boy's comic; Jack Thorne having to become a thief to get his first play on; Conor McPherson still waiting to write his 'first play'. There are also enthralling insights into the first steps in theatre of some of our principal actors and theatre directors: Antony Sher discovering theatre in Cape Town during the apartheid years; Dominic Cooke paying the price for using a real knife in performance; Harriet Walter's photographic recall of the annual outing to Peter Pan; Richard Eyre on an open-air performance of A Midsummer Night's Dream that descends into chaos. Published to celebrate twenty-five years of Nick Hern Books, the royalties from the sale of this magical collection of sixty-six miniature autobiographies will be donated to the Theatre Section of the Writers' Guild.