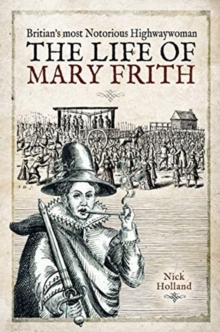 Britain's Most Notorious Highwaywoman : The Life of Mary Frith Hardback

Mary Frith was born in London in the 1580s, and she became one of the city's most famous, and infamous, women in the first half of the seventeenth century.

Turning her back on servitude and drudgery, Mary instead carved out a life of excitement and scandal that led to the London stage, Newgate prison and Bedlam.

Known to her contemporaries as Moll Cutpurse she courted controversy for dressing as a man and her wild ways as much as for her many criminal activities, but she inspired plays by Dekker, Middleton and even Shakespeare himself.

Her epitaph was written by John Milton, but her incredible story could only have been written by Mary herself. This new biography of Mary Frith aims to bring to light one of the seventeenth century's most fascinating women.

Using a variety of documentary sources and contemporary records, Nick Holland pieces together a life which was as daring as it was unconventional.

We'll see whether Mary really did escape from a ship bound for America to start a new life as one of London's criminal overlords, and we'll look at how she became such an inspiration for literary society of the day.

Did Mary really become a highwayman to hold up a Roundhead general?

Did she keep a coterie of pets including monkeys and eagles?

Did she have the power to decide who was hanged and who lived, and why was she committed to the Bethlehem Lunatic Asylum?

Sometimes fact is stranger than fiction.