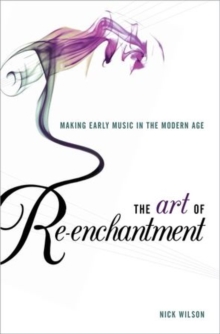 The Art of Re-enchantment : Making Early Music in the Modern Age Hardback

Heard today in concert halls across the world and in a library's worth of recordings, it has completely transformed the way in which we listen to 'old' music, while revolutionizing the classical music profession in the process.

Yet the rise of Early Music has been anything but uncontroversial.

Did HIP's scholar-performers possess the skills necessary to achieve their uncompromising agenda?

Was interest in historically informed performance just another facet of the burgeoning heritage industry? And was the widespreadpromotion of early music simply a commercial ruse to make money put forward by profit-driven record companies? In The Art of Re-enchantment: Making Early Music in the Modern Age, author Nick Wilson answers these and other questions through an in-depth analysis of the early music movement in Britain from the 1960s to the present day.

While other books have examined the history of early music's revival, this interdisciplinary study is unique in its focus on how various constituencies actually made their living from the early music business.

Through chapters discussing the professionalization ofearly music, the influence of institutions such as the BBC and record companies, and the entrepreneurial role of leading early music pioneers, this book will shed new light on one of the most fascinating and influential movements in 20th Century art music.

The Art of Re-enchantment begins a much-needed conversation about the true value of art and authenticity today.

This volume is a must have for early music fans and performers, music historians and musicologists with an interest in performance practice, and anyone interested in the production, distribution and consumption of music.