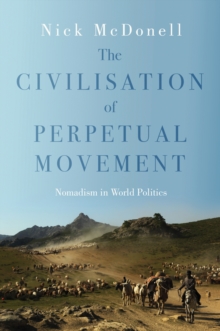 Civilisation of Perpetual Movement : Nomads in the Modern World Hardback

From the Chinese Emperors to the Romans and the Byzantines, from British Foreign Office agents in the Great Game to today's hippies, backpackers and aid workers, a long line of 'civilized', sedentary peoples have again and again misunderstood nomads, and nomadism.

Caricatured as backward herders, thieving pastoralists, or members of some vast and undifferentiated horde of humanity forever wandering the planet, nomads are usually perceived as anything but modern and almost always as on the verge of obsolescence. 'The Civilization of Perpetual Movement' is the first examination of nomadism as a vital global political practice.

Nick McDonell - bestselling novelist and war correspondent - draws upon his years spent with and research into nomads on every continent to illuminate what is, and has always been, a most modern practice.

In the lucid, evocative prose which earnt him comparisons with Graham Greene and John Le Carre in the New York Times, McDonell illuminates the ways nomads and states influence each other, historically and today - with surprising consequences, from the plains and mountains of Central Asia to the grasslands of the Rift Valley.Part literary meditation, part reflection on international relations, part original history, 'The Civilization of Perpetual Movement' is an instant and unclassifiable classic, in the tradition of iconoclastic thinkers from Bruce Chatwin to James Scott to T.