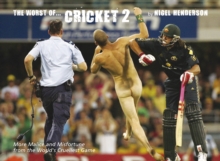 The Worst of Cricket 2 : 2 Hardback

"You do well to love cricket," said Lord Harris, "for it is more free from anything sordid, anything dishonourable, than any game in the world." Harris, who captained the first England team to do battle with the Australians in this country, obviously never got his hands on a copy of The Worst of Cricket.

If that volume failed to totally convince you that the sport is designed to disturb, dismay and disgruntle in equal measure, then maybe it was because it only scratched the surface.

Subtitled 'More Malice and Misfortune in the World's Cruellest Game', The Worst of Cricket 2 completes the job, taking up where its predecessor, one of the best-selling titles in Pitch's popular 'Worst of Sport' series, left off.

The book takes another humorous look at the whole catalogue of malevolence, misadventure and madness associated with the sport - corruption, violence, drunkenness, incompetence - on and off the pitch!