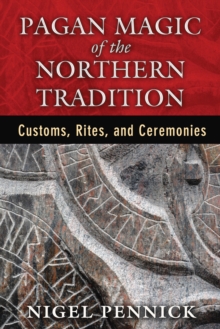 In the pre-Christian societies of Northern Europe, magic was embedded in the practical skills of everyday life.

Everything in Nature was ensouled with an inner spirit, as was anything made by hand.

People believed in magic because it worked and because it was part of the functionality of their day-to-day lives.

Many of these practical observances and customs continue to the present day as rural traditions, folk customs, household magic, and celebrations of the high and holy days of the calendar.

Exploring the magical pagan traditions of the people now called Celtic, Germanic, Scandinavian, Slavonic, and Baltic, Nigel Pennick examines the underlying principle of the Northern Tradition--the concept of Wyrd--and how it empowers the arts of operative magic, such as direct natural magic and talismanic or sigil magic.

Sigil magic involves the powers contained in objects, which can be channeled after the appropriate ritual.

Runes are the most powerful sigils in the Northern Tradition and were used to ward off illness, danger, hostile magic, and malevolent spirits.

Emphasizing the importance of the cycles of Nature to the tradition, Pennick explores the eightfold sun dials and the four ways the solar year is defined.

He looks at the days of the week and their symbolic association with different deities as well as why particular acts are performed on certain days and what the customary lucky and unlucky days are.

He also examines sacred spaces, household magic, protection spells, and the role of music in the Northern Tradition.

Pennick shows how anyone can participate authentically in the magic of the Northern Tradition if they take care to do things properly, with respect, and on the right day.